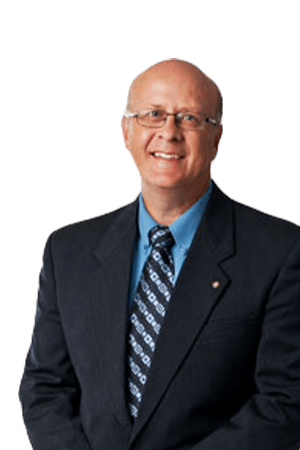 Dan Dickinson knew from an early age that his future lay in accounting. What he couldn’t have predicted then was that he would spend his entire 38-year career with one Belleville firm: Wilkinson and Company. That employment “streak” came to an end with his retirement on December 31, 2021.

“I always loved solving math problems and dealing with people, so the accounting profession seemed like a logical career for me,” says Dan. He credits his accounting teacher at Napanee District Secondary School for making that subject “really interesting” and helping to set him on his professional path.

Born in Mississauga, Dan moved with his family to Deseronto when he was five years old. After graduating from high school in Napanee,  he completed a Bachelor of Commerce degree at Queen’s, in 1984, and “was lucky enough to get a position with Wilkinson.” Two years later, Dan qualified for his Chartered Accountant designation, and in 1991 completed the Institute’s in-depth Tax Program.  In 1993 he became a partner in the firm.

“Most new grads think Toronto is the only choice for work opportunities, but I don’t agree,” says Dan. “I think  the training, the lifestyle and the work/life balance at a smaller firm are wonderful things… And after growing up in Deseronto, Belleville was a big city to me!” he adds.

Some of Dan’s fellow graduates who moved to national firms in Toronto became compartmentalized. “They could only work on one or two large clients, doing specific, boring audit tasks,” he says. “At Wilkinson, I was immediately doing entire files, and learned so much. The client companies were much smaller, but they had the same issues … just not as many zeros on their numbers!”

Staff at a smaller firm have more feeling of ownership, as well as opportunities for partnership, he notes. “A lot is invested in training staff, and partners don’t want to see the best ones leave.”

Recruiting, hiring and supporting staff has been one of the most rewarding parts of his career, Dan attests. “A tangible accomplishment to look back on after all these years is the number of bright young students who became CAs or CPAs at Wilkinson,” he says. “Some stay, some don’t, but most are better off after working for us. They’re very marketable and can write their own tickets … There’s great satisfaction in seeing them succeed.”

A tax specialist, Dan has always enjoyed helping clients – whether large or small businesses, or the occasional not-for-profit – save money and add value to their business. With government regulations constantly changing, and the introduction of new programs, “You have to keep on top of things, for sure,” he says.

When Dan moved to Belleville, he wanted to contribute to the community through a service club. Discovering “some pretty amazing business people” in Rotary, he joined that organization, eventually becoming president, in 2000-01. He has also served as treasurer of the Rotary Loves Kids Golf Tournament since 2003, organizing annual tournaments that bring in an average of $100,000 a year to help children in need.

Looking ahead to retirement life, Dan is excited about the new home that he and his wife, Jennifer, are having built on a lot they’ve owned in Prince Edward County for the past eight years. When construction is completed this spring, they plan to move there full-time. “It’s going to be beautiful,” he says enthusiastically.

With two other CAs in his household – both Jennifer, who is Chief Financial Officer for Albert College, and their older son, Ian, who works for RBC – Dan quips, in his usual dry manner, that he’s “the third smartest accountant in the family!” Countless clients and staff members at Wilkinson, whose lives he has touched in a positive way, would strongly disagree.

According to Belleville Office Partner, Brian Kehoe: “Dan has been the critical glue for our Wilkinson team over so many years. I can’t say enough about his passion for providing leadership in the care, focus and career development of all of our staff.”

Brian underscores Dan’s commitment to be there for his clients throughout an exemplary career with Wilkinson. “Dan has always been a champion for this area and for how our firm could support the great communities where we thrive,” he adds.